Hi again, another post from Shelagh-land - twice in one week well, I have been a bit more productive - not so much in 'making' - but remembering to take photos!
I have had a number of dies and new Clarity stamps resting in my craft room for a bit and when asked to make a wedding card at short notice, I decided it was a good time to play productively. 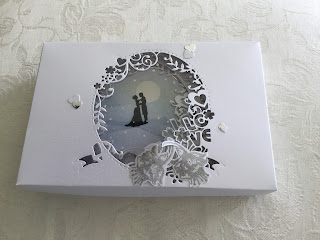 A Tonic die was used to cut out the aperture for the box lid and also for the card frame from white pearlescent card, the latter also in silver card. Waste heart cut outs were used to decorate the box, along with Clarity Stamps small fuchsias.
Snowfall acetate was added to the back of the aperture as this reminded me of confetti. 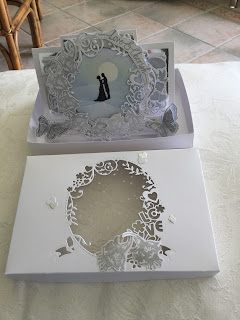 The stepper was cut using Tattered Lace stepper die - gosh, how easy this makes steppers and all the layering, a big change from all the measuring I usually do for my signature card.
The central circle was cut using a plain die on Neenah Solar White before the 'couple' from one of the latest Clarity Wee Folk' sets was stamped using Versafine Onyx Black and clear detail embossed. 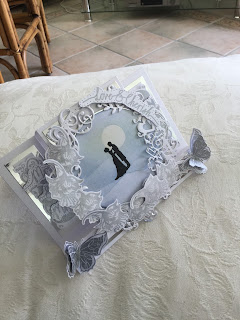 On this, Stormy Sky was brushed over torn paper and moon mask to create a landscape then Squeezed Lemonade added sparingly. 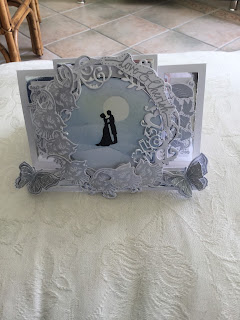 Once the layers were added onto the stepper, more Clarity small fuchsias were stamped, embossed and added, along with two Clarity butterflies.

May I say what a joy it has been to put together something that reflects my favourite techniques - die-cutting, stamping, stepper cards. I have a few more things to do over the next few weeks and hope to share the outcomes with you, successful or otherwise. This is the lead up to one of my busiest times outwith you-know-what! what with anniversaries, birthday cards for four generations and having to think up at least four variations for each occasion as I make all the family cards. I may even resort to a few quick makes - and why not!

Please come back and watch this space! You are more than welcome anytime. Meantime, back to the down-sizing of my craft room - not really - only disposing of some or many of the items I have 'outgrown.'
My mum's reaction to this - 'You'll only buy some more to fill in the spaces.' Never a truer word! 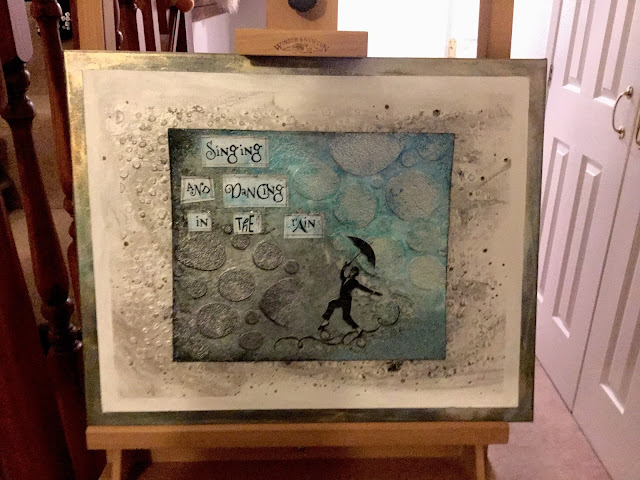 Singing and Dancing in the Rain
Hello there and welcome again to Shelagh-land and thank you for taking the time to read my rambles and this month I do tend to, so be warned!

Here we are in what is supposed to be 'Flaming June' and in a few weeks we will have the longest day of the year. However as I write this it is flaming raining, I've already suffered a drenching three times this week, or 'drookit' as is how I described it to my mum but oh so appropriate for my Clarity Challenge submission 'Singing and Dancing in the Rain.'

However, if I may, I'm going to take you on my journey in completing my canvas as it is not at all as I planned. IT was a card!

Early on I had an idea using some stamps from the 'Sunny Shades' set, augmented with a few others. I was going to be out of the country for most of the planning and prepping time so off I went an extra suitcase in hand, filled a selection of crafty necessities - stamps, stencils, ink pads, pens, pencils, a shield-shaped die (big clue) and the rest.
Over a few weeks I managed to make both 'innie and outie' stencils in my make-shift craft room along with two types of texture paste - it's amazing what you can concoct with bicarb, PVA, Gesso and talc - and set to work experimenting.

I also continued to read Barbara's daily blog and this was where my great idea ended as I'd chosen the theme 'Route 66.' Ah well, the best laid schemes!

Now to my alternative:-

I must say it took over a week to come up with an idea as I kept thinking of things then rejecting them.
This canvas stemmed from a number of different paste products I found which contain different elements, it's just a pity that the glisten and gleam are not replicated in the photos. 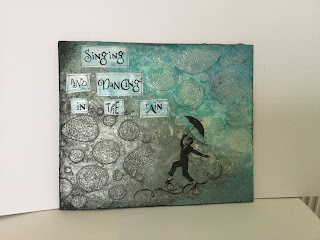 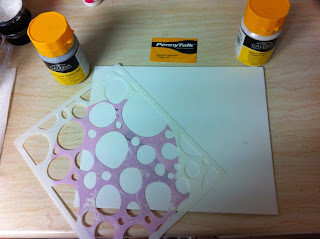 Method: -
1.       The canvas was coated with gesso and smoothed out with an old store card then left to dry. The large ‘Double Bubble’ stencil was placed over the top right hand corner and glass bead medium spread through with a palette knife. The stencil was washed to remove any paste residue and dried. The stencil was then placed on the lower left hand corner where the lava paste was spread over with the palette knife.
2.       At this point the canvas was left to dry overnight. 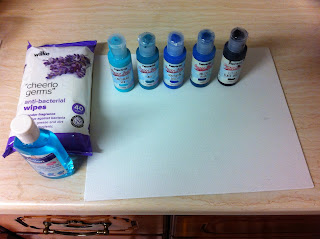 3.       Using Fresco Finish, I coated the textured canvas completely with Honey Dew, the blues were added from top right hand corner and blended diagonally, whist the Little Black Dress was added sparingly to lower left and blended upwards to blue area. Paint was removed using baby wipes to create light and shade. I also blobbed on some hand sanitizer gel to  areas between textured bubbles which also removed some paint. 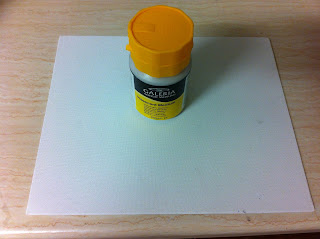 4.       When dry, Iridescent Medium was added to the textured areas. At this point, I kept adding more glass bead medium over as the stencilled areas were too flat and also to areas in-between. I 'puddled' the areas with my fingers to create an uneven texture. 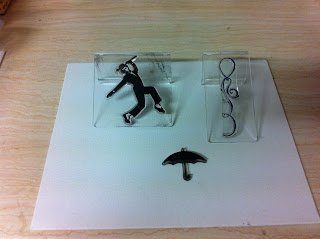 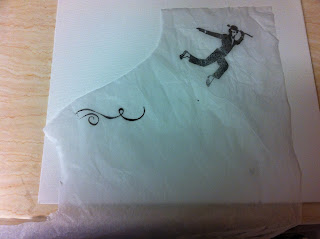 5.       The Jazz Man, Umbrella and two balloon images were stamped onto tissue paper using Onyx Black and then heat -set. (I tried Staz-On and Archival but the results were too patchy.) I cut out all images and coloured over the white areas on the reverse of the Jazz Man with Spectrum Noir White pencil. I also cut away the walking stick from the Jazz Man.  Two balloon strings were placed and glued on with Mod Podge before the Jazz Man and umbrella were added. 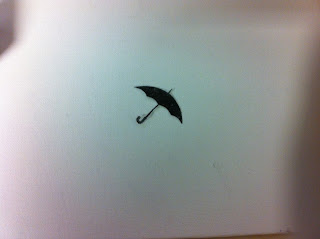 6.       I stamped the words using a compilation from Word Chains and Archival Black onto Theuva Card, scribbled lines to form borders, then coloured them using a Distress Marker Spritzer and Broken China marker. These were then Mod Podged onto the canvas. 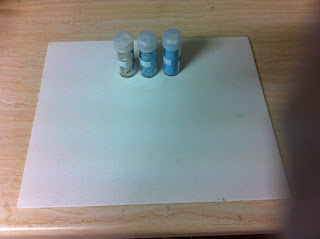 7.       I added highlights and shading to various areas along with glitter and blue micro beads.


8.       I applied some Little Black Dress around the edges and in particular to both left hand corners but removed some with baby wipes. 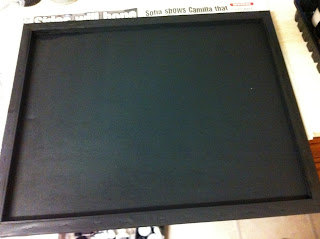 I'm not happy with the overall appearance as my canvas needs a backing and the large card I have is too flimsy so please bear with me as I have a play in my 'alchemy' corner of the kitchen, I do have an idea. Whilst down at my mum's this week, I picked up a set of stretched canvasses so here goes.
I painted both sides with black gesso then a coat of matte Mod Podge before applying embossing paste through the Clarity Treescape stencil, having first masked off the trees. 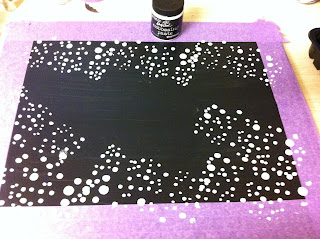 This was then gilded first with silver gilding wax then with a number of other colours. I did NOT like it!

Things are getting critical!

I slept on the idea but it still was not to my liking.
However, I did like the sheen I'd achieved on the extreme border so this was masked off all round then white gesso applied several times followed by Fresco Snowflake. Once dry, another area was masked off all round to create a white border before iridescent paste mixed with Fresco Little Black Dress was applied using a spatula.
Masking tapes peeled off, canvas attached to the centre using gel medium . . . . . . .
Et voila! 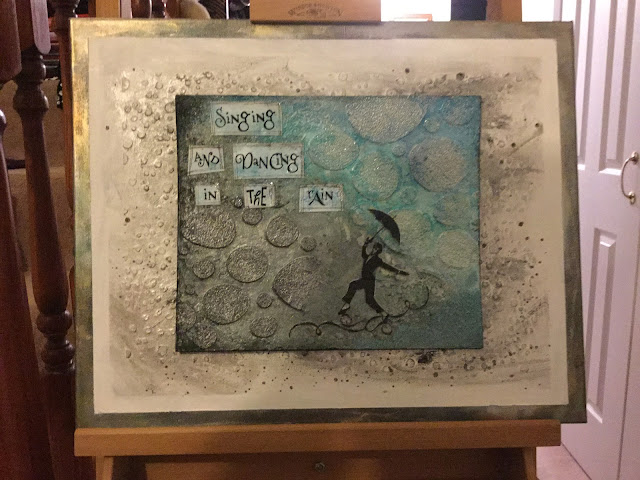 This month's Clarity Challenge is 'Boys, Boys, Boys' and  I very much look forward to viewing all your submissions. Barbara's ingenuity never ceases to amaze me and this has encouraged me to look at Clarity products in other ways and judging by your clever and inventive monthly submissions you too also seek to stretch those boundaries.

Once again, thanks for visiting, Should you have any questions or queries, please do not hesitate to get in touch and I'll do my best to answer them. 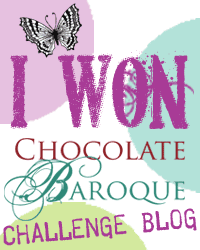 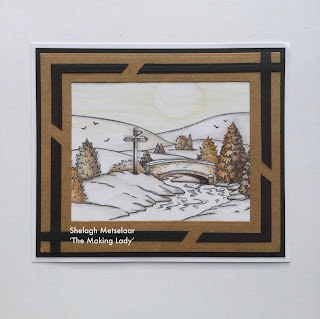